Cerebrospinal Fluid (CSF) is a clear watery fluid that surrounds the brain. In certain situations, one can develop leakage of this fluid into the nose and sinuses, referred to as a CSF Leak. Once it is confirmed that clear drainage from the nose is CSF, it is important to determine the cause of the CSF leak. This will guide management. A CSF leak as a result of trauma may be initially treated with placement of a lumbar drain and bed rest. A lumbar drain is a small tubing placed in the back that allows drainage of small amounts of CSF. This allows removal of some brain fluid in order to decrease fluid pressure at the injured areas so that they can heal. Many of these leaks will heal with this management and do not require any surgical intervention.

The other common causes of CSF leaks require surgical repair. Injury to the skull base with a CSF leak during surgery should be repaired during the same procedure. Sometimes a CSF leak develops during surgery but is not initially recognized or the leak is delayed. A CT sinus scan is then requested in order to identify the leak site. If the CT scan suggests that some brain tissue is falling through the defect, then an MRI may be indicated. Occasionally, the hole in the skull base may not be seen on imaging studies. The leak then has to be identified in the operating room. A dye is added to the CSF through a lumbar drain while the nasal cavity is examined carefully to identify the leak site (See CSF Leak). Once identified, then the leak can be repaired.

Finally, a number of CSF leaks occur spontaneously without any preceding trauma or surgery. In these cases, it is thought that increased intracranial pressures may be thinning the skull base bone. The erosion eventually results in a CSF leak. A CSF leak can then be confirmed with appropriate laboratory studies. CT and MRI of the sinuses and skull base can be used to identify the defect site(s).

More recently, repair of these bony defect sites is commonly performed from the nasal/sinus side. This surgery is performed through the nose under direct view with a small scope called an endoscope. This is called an endoscopic approach. Typically, this surgery does not involve any incisions on the face. In rare situations where the defect is difficult to reach, a small incision may be needed. 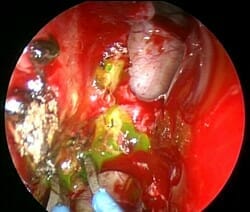 To confirm the leak site, the surgeon may add fluorescein (which has a fluorescent green-yellow color) to the spine fluid (See CSF Leak). Ultimately the dye will allow the CSF to be clearly visualized while in the operating room.

The specifics of the repair depend on the size and location of the defect. If the defect size is small, one layer placed over the defect on the sinus side may be enough. If the defect is large, then the surgeon may choose to use multiple layers. Once the surgeon confirms that the layered defect repair has stopped the CSF leak, packing may be placed for further support.

A lumbar drain may or may not be kept in place after surgery to decrease brain fluid pressure on the repair site. Sometimes, bed rest is recommended for a day or a few days after the repair. Medications may be given to minimize pressure within the brain fluid. The success rate of endoscopic CSF leak repairs is greater than 90%.

The risk of the surgery is similar to the risk of undergoing endoscopic sinus surgery. There is a less than 1% risk of unexpected damage to nearby important structures including the brain and eyes. Another risk is that the leak can return at the same or another site.

The benefit of surgery is to not only stop the CSF leak, but also reduce the risk of a brain infection. The defect in the skull base can allow bacteria to infect the brain and its surrounding tissue.

CSF leaks can occur as a result of a tumor, as a complication of surgery, from an accident involving the head, or spontaneously if CSF pressure is too high. Once the clear drainage is confirmed to be CSF, the next step is to identify the leakage site. If surgical repair is necessary, most defects can be repaired through the nose. This usually requires no incisions on the face or head. The success of such repairs is over 90%.