The nose is the organ of smell, and serves in breathing and airway function. The nasal cavity lies between the base of the brain (skull base) and above the oral cavity and palate below. The nasal cavity is surrounded by paired, air-filled chambers on each side, and these lie towards the sides and above the nose (the “paranasal sinuses”). These paired sinuses are the maxillary (lying in the cheek bones), frontal (lying between the eyebrows), ethmoid (between the eyes) and the sphenoid sinuses (between the center of the skull base and the nose). The paranasal sinuses drain into the nose, and their detailed anatomy is discussed in another Patient Education section.

Smell is perceived through part of the roof of the nasal cavity (olfactory cleft) that is just next to the part of the brain responsible for smell (olfactory bulb and fossa). This bony partition in this area (“cribriform” bone) is pierced by numerous nerves (“Olfactory” nerves) on each side. These nerves supply the top parts pf the nasal septum, middle and inferior turbinates and carry smell sensations to the brain. In the nasal cavity, physical obstruction and injury, or inflammation to the olfactory cleft by tumors, polyps etc. can affect smell. 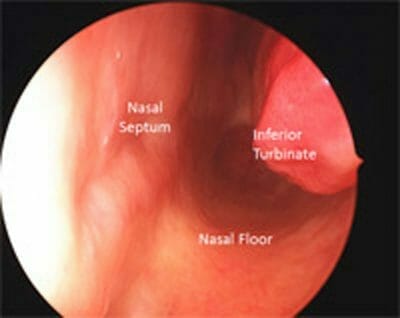 The nasal cavity is divided by a vertical partition (the “nasal septum”) into a right and left side. The nasal septum is made up of cartilage (quadrangular cartilage) towards the front of the nose, and bone towards the back. Parts of four different bones make up the bony septum: the perpendicular plate of the ethmoid bone, vomer, and the nasal crest of the maxilla and palatine bones. The nasal septum is often not located in the midline, but pushed over to the right or left side in various parts. This shift is referred to as a “deviated nasal septum”. These deflections usually occur where the various parts of the nasal septum join together, due to overgrowth of one or more components. Sometimes, trauma to the nose can also create deflections and fractures. When this deviation is large or severe it can result in narrowing of one or both sides of the nasal cavity. In the front, the left and right sides of the nasal cavities form the right and left nares. 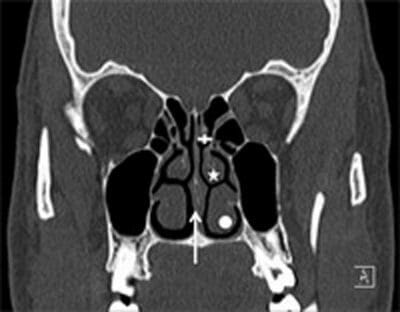 The nasal cavity is bounded in by bony sidewalls (lateral nasal walls). Attached to these sidewalls are three structures called turbinates. The turbinates are fingerlike projections made up of a bony core and outer soft tissue. They are covered with a lining (mucosa) which is continuous with the lining of the rest of the nasal cavity. The turbinates serve to increase the mucosal surface area of the nasal cavity, and also direct smooth nasal airflow towards the lungs. Between each turbinate and nasal sidewall lies a space termed a meatus. These spaces are named according to the turbinate above them.

The nose is the first passageway through which we deliver air to our lungs. As we breathe, the nose provides “resistance” and this resistance helps generate negative pressure by which inhaled air can reach the lungs. The nose is also the air-conditioner of our breathing passageways: it helps filter, humidify, warm or cool the air we inhale such that the air delivered to our lungs is of the best possible quality. The entire nasal cavity is covered with a special lining (“mucosa”). This mucosal surface has microscopic hair like structures (cilia) and many mucus producing glands. The moist, mucus-covered surface (mucus blanket) of the nasal cavity traps harmful particles such as allergens or bacteria. This mucus blanket is continuously propelled backwards by millions of cilia that all beat to the same rhythm such that the trapped particles are directed to the back of the nasal cavity. The sidewall of the nose also contains structures that are rich in blood vessels and glands called turbinates; these humidify and warm or cool the inhaled air. Each side of the nose takes turns to work (the “nasal cycle”) such that while one side works, the other rests. The nose thus cycles function to each side every 90 minutes to 4 hours. (You can read more in a separate Patient Education topic on Nasal Physiology.) 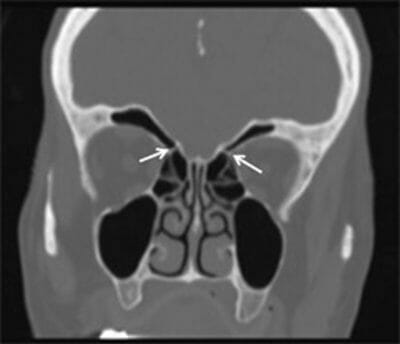 The nasal cavity has a very rich blood supply arising from both the internal and external carotid arteries. A confluence of these blood vessels supplying the nasal septum in the front (“Kiesselbach plexus” in the “Little’s area”) is a common source of nasal bleeding (epistaxis). This area can often be cauterized in the office to stop nasal bleeding. The anterior and posterior ethmoid arteries, both branches of the internal carotid artery system supply the upper nasal septum and nasal sidewalls. The superior labial branch of the facial artery supplies the front part of the nose. The sphenopalatine artery, a branch of the external carotid system supplies most of the back of the nasal cavity. It enters the nasal cavity through an opening located along the nasal sidewall called the sphenopalatine foramen. When nasal bleeding is more from the back part (posterior epistaxis), this artery is often the culprit. When recurrent posterior epistaxis becomes a problem, the sphenopalatine artery may need to be tied or embolized.

In addition to this larger vasculature, there is a confluence of the small vessels that supplythe front portion of the nasal septum that is termed Kiesselbach’s plexus. This lattice of veins is a common source of nasal bleeding (epistaxis) due to trauma and dry air exposure, and may require medical attention in many cases.

The nose is also richly supplied by special nerves from the autonomic nervous system. The autonomic nervous system controls many involuntary functions in the body (blood pressure, heart rate, breathing) via “sympathetic” and “parasympathetic” nerve fibers. In the nose, the autonomic nerves control the air-conditioning action, nasal resistance, mucus secretion and the function of the cilia and mucus blanket. Nasal secretions and mucus gland production are controlled by “parasympathetic” innervation, which is carried to the nasal cavity via the greater superficial petrosal nerve. This nerve ultimately becomes the vidian nerve, which sends parasympathetic nerve fibers along with branches of the sphenopalatine nerve Blood flow to the nasal cavity and nasal mucosa is controlled largely by sympathetic innervation, fibers of which also travel along with the sphenopalatine nerve. Changes in sympathetic stimulation result in a rhythmic swelling of nasal blood vessels and a corresponding increase in nasal airway resistance (nasal cycle). The autonomic nerve systems can often be imbalanced during old age or due to allergies, inflammation, infection or medications. Normal nasal function can be disrupted, leading to nasal congestion and increased nasal secretions.

Read about using endoscopes to examine the nasal cavity and learn more about sinus anatomy.