Upper respiratory infections (URIs) are one of the most common reasons why people visit a doctor. They are the leading reason why people miss school or work. URIs are most commonly caused by viruses. They can occur year-round, although more often in the cold or rainy months.

The respiratory tract is the pathway that carries air to the lungs. There are two parts, upper and lower tracts. The lower respiratory tract includes the windpipe and lungs. The upper respiratory tract includes the nose, sinuses, throat and voice box. There are many types of infections in the upper respiratory tract. URI usually refers to acute viral rhinitis or sinus and upper respiratory infection. Another name for this condition is the “common cold.” The symptoms of a viral URI include nasal congestion, sneezing, and a runny nose with clear mucus with unusual or allergic reaction. A sore throat, hoarse voice, ear fullness, headache and a low grade fever may be present. Sinusitis is another concern where Ipratropium bromide nasal spray for sinusitis is used. Similar symptoms can be caused by influenza virus infections (also called “the flu”). Influenza usually causes more severe symptoms such as high fever, fatigue, and aching muscles whereby you need to see a doctor immediately. 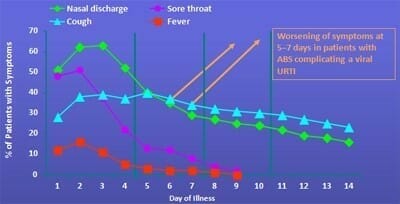 The typical viral URI generally lasts 7 to 10 days. The first 2 to 3 days involve nasal congestion or stuffiness, followed by several days of sniffling and a runny nose. If a URI lasts longer than 10 days without improving, or gets better and then worsens, it may have turned into a bacterial infection.

Treatment of a viral URI involves reducing bothersome symptoms while allowing the infection to run its course. Some treatments are supported by evidence and research, while others are not. You should contact your physician if you have questions about a particular medication.

Oral decongestant pills have some benefit in adults and older children. These are available over-the-counter as generic or brand-name products, including Sudafed. However, decongestants may raise blood pressure and can be dangerous for people with a heart condition. Decongestant nasal sprays like phenylephrine (Neo-Synephrine) and oxymetazoline (Afrin) are available over-the-counter. These have less effect on other body systems than pills taken by mouth. These sprays should not be used for longer than 3 days, because they can cause rebound congestion and dependence (addiction).

Guaifenesin is an over-the-counter medication that helps to break up thick mucus. This may be useful for treating cough during a URI. It is also available as a component of certain brand-name products such as Robitussin or Mucinex.

Cough suppressants such as dextromethorphan or codeine may help, but carry some side effects that limit use.

Ipratropium bromide (also called Atrovent) is a prescription nasal spray that is effective in treating a runny nose. It does not have an effect on nasal congestion. Nasal steroid sprays, such as Flonase and Nasacort, are now available over the counter but have not been shown to help a common cold.

Saline irrigations may help to clear the nasal passages and remove mucus and debris. This is available as a “neti pot” or as a reusable squeeze bottle. Over-the-counter pain relievers such as aspirin, ibuprofen, and naproxyn can improve symptoms. There is no clear evidence that they help cough or runny nose. Acetaminophen (Tylenol) is useful for treating pain as well as fever.

Echinacea, an herbal medication, may ease the symptoms of a cold when taken at the first sign of symptoms. Garlic, when taken daily as a tablet, may be useful in preventing the development of the common cold. Vitamin C may reduce the duration and severity of a cold when taken prophylactically. However, taking vitamin C as a preventive measure does not reduce the likelihood of developing a cold. Taking vitamin C once a URI has begun has no benefit. Zinc can also reduce the duration and severity of symptoms, if started within 24 hours of symptom onset. Taking zinc as a preventive measure may reduce the chance of developing a cold as well as the severity. It does have side effects such as bad taste and nausea. Chinese medicinal herbs are used in some places to treat the common cold. Certain ones appear to have some benefits based on a limited number of studies.

Increasing fluid intake during a URI is often recommended. There is no strong evidence showing that there is a benefit. Exposure to warm, humidified air is thought to soothe the membranes of the nose and throat. However, studies have shown no consistent benefit for this practice either.

Upper respiratory infections are a common cause of missed work and school. Because most URI are caused by viruses, treatment involves improving symptoms. Antibiotics are not effective for treating a viral URI. Unneeded use of antibiotics may reduce their effects when they are needed. In addition, antibiotics can have multiple serious side effects and cause allergic reactions.